Jacob finished his undergraduate degree at Westminster College in Salt Lake City, Utah, with a bachelor of science in neuroscience. His core interest is in regenerative neuroscience, specifically concerning spinal cord injury. Jacob’s current work involves characterizing the location and function of synaptic vesicle proteins in dopamine and glutamate neurons. Jacob is from Portland, Oregon, and now lives in the Picfair Village area of L.A. When he’s not in the lab, Jacob is spending time with his two cats or practicing drums, trumpet or guitar. 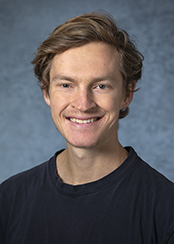 Noah received his bachelor of science from the University of California, Santa Barbara (UCSB), where he majored in cell and developmental biology and minored in religious studies. During his time there, he joined the Diego Acosta-Alvear Lab, where he worked on the creation of a deep-sequencing platform to elucidate the structural determinants of RNA-based toxicity, and used CRISPR to screen for the molecular targets of Avicin D, a potential anti-cancer drug. He graduated with highest honors, receiving the Distinction in the Major award for excellent research, and the Robert L. Sinsheimer Award for achieving the highest academic performance among graduating seniors in the biology major. From February until August 2021, he interned in the Godfrey Lab at the City of Hope Cancer Center, where he investigated the genetic landscape of diffuse large B-cell lymphoma and its implications for patients’ response to immunotherapies. Noah is now studying the molecular mechanisms regulating dopamine release and how they affect information processing along brain circuits. In addition to conducting research, Noah has pursued a variety of clinical experiences and hopes to combine his dual passions in a future career as a physician-scientist. In his free time, you can find him running, rock climbing or reading a good book. 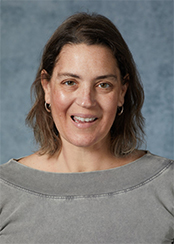 Ellen earned two bachelor’s degrees — in neuroscience and psychology — from East Carolina University and a PhD in neuroscience from the University of Texas at El Paso. As an undergraduate, Ellen’s research involving operant paradigms of drug-seeking and -taking behaviors in rats led her to earn the first neuroscience degree awarded in the history of East Carolina University. Subsequently, her dissertation research examined the topographical connectivity of the ventral tegmental area and the hypothalamus. Presently, as a postdoctoral scientist in the Silm lab, Ellen will be investigating the connectional properties, chemical identities and transmitter release of ventral tegmental area, prefrontal cortices, caudate putamen, and nucleus accumbens neurons containing multiple neurotransmitters and neuromodulators that include, in part, dopamine, norepinephrine, epinephrine and glutamate transporters. She will go on the tenure track faculty job market in the next few years with the intention of directing her own lab group. Ellen can be found at the dog park playing with her puppers or cycling on the Ballona Creek bike path when she isn’t wielding a pipette or peering into a microscope.